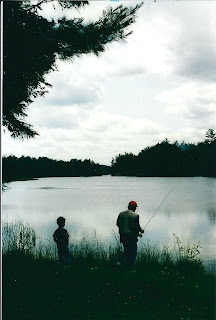 I am missing my brother today.  He was the middle child, I the oldest, Bud the youngest.  He loved the outdoors, camping, fishing, hunting.  He loved the woods, and its presence, as much as the creatures in "Avatar."
I saw the film for the first time today.  I'm not sure how I feel about it.  The hype was so overwhelming, I expected something more than a "war" movie.  Are marines only the good guys as long as the serve the military, and aren't corporate militia?  Do real scientists need to die when they become personally involved in the objects they study?  Are the only ways to survive in a future without green - greed, and the search for more, or to become something else, like a tall blue humanoid?  The joy of riding dragon, or broom, or winged creatures is apealing, but it all seems to deny the simplicity that is ours if we choose it.
Like my brother chose.  He could have climbed the corporate ladder.  He could have told the lies/half truths, or made the promises to sell the equipment, but he didn't.  It wasn't in him.  He told the truth about the product, and then, when the companies chose someone else, they hired him to correct the faults of the other product, and wished they had listened to him.
I wonder if being the middle child created the wholeness he embodied?  He was kind, loving, patient.  All the virtues I wish I could demonstrate.  He was seldom angry, and usually only angry when those he loved were threatened.  He taught humility by his very being.  And I loved him.  I miss him today.
Posted by Kate at 5:03 PM